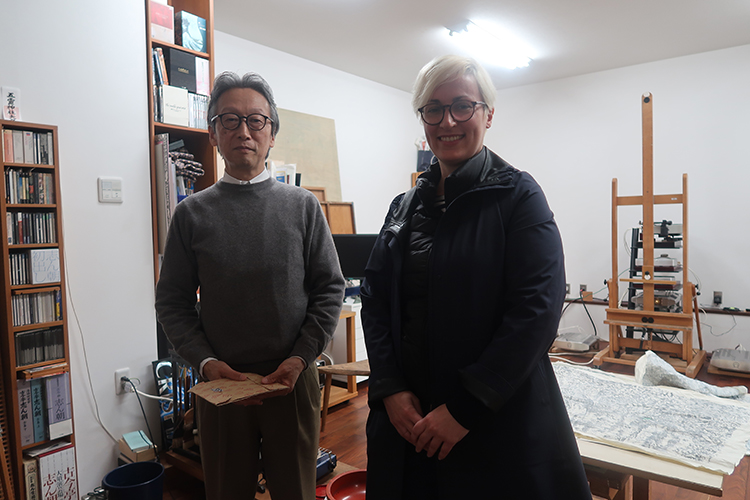 On Monday, March 23, 2020, a woman from France visited the home atelier of Mr. Tomotoshi Hoshino.

Her name is Laetitia Larralde, editor of the web media of Toute La Culture, which provides information on trends and culture in and outside of France. She is also an artist known for her production of works in a wide range of genres including illustrations, comics, and art prints.

With her profound knowledge of Japanese culture, Ms. Larralde requested the interview on this occasion as she “wanted to observe the production site of a Japanese artist in order to get to the core of his art.”

Mr. Hoshino welcomed Ms. Larralde at his own atelier in Kamakura. Experience the sincere affection for art that the two of them have from the description of what transpired that day which Ms. Larralde wrote in her blog.

“Nature created by artists, and artists created by nature” as seen from the works of Tomotoshi Hoshino

Mr. Tomotoshi Hoshino is an artist of Japanese paintings. On this occasion, I managed to get an opportunity to conduct an interview at his atelier and listen to him talk about the relationship between art, nature, and spirituality. 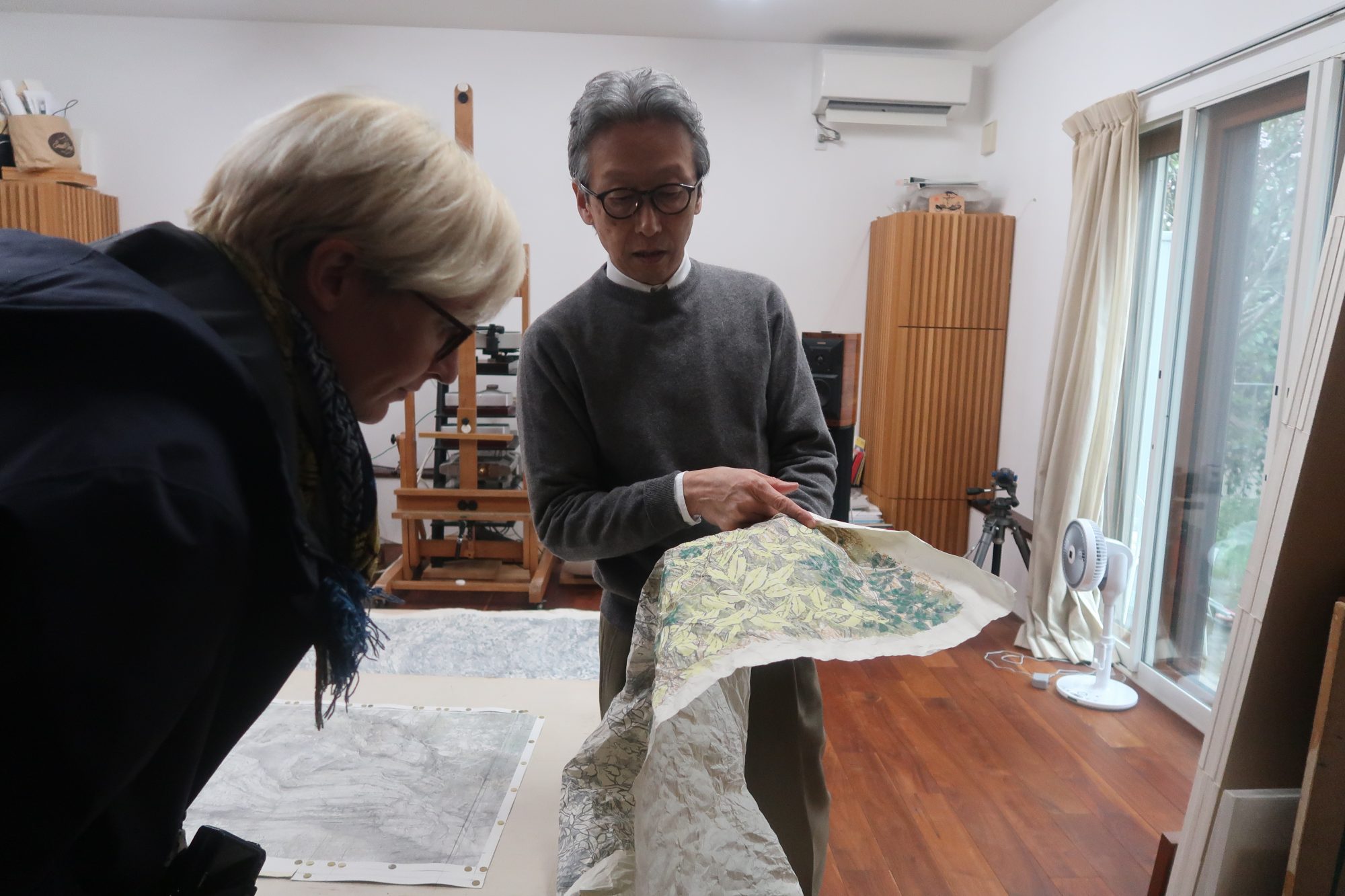 Going through the interview at the home atelier

Mr. Tomotoshi Hoshino’s atelier is opened on somewhat high ground in Kamakura, surrounded by vegetation. The view is full of rich nature. One could say it’s only “natural” that the works that he produces here are depictions of things in nature. Although works using nature as a theme are not rare, Mr. Hoshino adopts nature not only as a main theme but also as an indispensable element existing in his production process and creativity. Mr. Hoshino is an artist of Japanese traditional paintings who believes in Shintoism.

The term “Japanese painting” appeared at the end of the 19th century as a reference to works drawn using techniques and methods that use traditional Japanese drawing materials. Conversely, those that adopt a Western style are known as “Western paintings.” Subsequently, Japanese artists also incorporated Western processes into Japanese techniques that have existed since centuries earlier, rather than clinging to traditions. I thought this is similar to the philosophy of the Meiji era. Modernization was carried out according to Western principles while protecting the spirituality of Japan.

Although this art trend was well-known as a trend before current Japanese paintings were created, in reality it existed from a few centuries earlier. This art is called “yamato-e.” The world that Mr. Hoshino aims for lies in here.

As another separate trend, Chinese paintings were studied in Japan around the 8th century. At that time, Japanese artists combined Japanese themes with the techniques that came from China to create a new type of Japanese classics. The works produced in this period are extremely refined and highly rated even now.

“Nature and the seasons” are positioned as an extremely important theme of yamato-e, exerting a strong influence on the materials used for the paintings too.

The works of Mr. Hoshino stem from a desire to fully depict natural scenes full of luxuriant leaves, branches, and minerals in detail, and include works so large that he creates them on four folding screens. There are also works that he says he began 4 years ago. One can feel the creative process of an artist in his works. 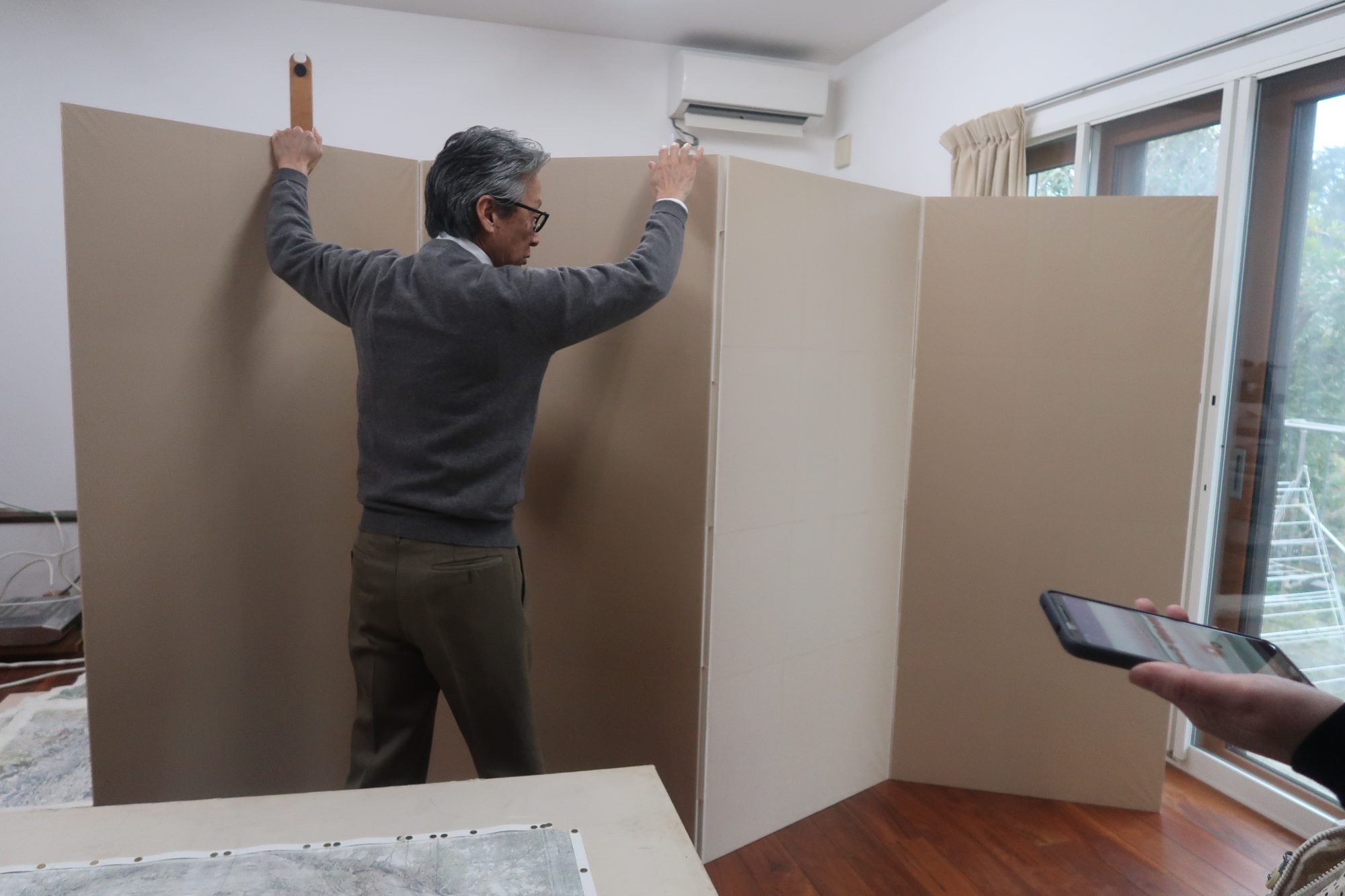 During the interview, Mr. Hoshino conducted a demonstration on the preparation of the art materials. Facing a shelf lined with small bags of pigments made from minerals, plants, insects, seashells, etc., he selected a green pigment made from malachite.

To make these materials stick to a painting, he adds water and an adhesive known as “nikawa” that is animal in origin, mixing them with his fingers until it becomes watery like the colors of a watercolor painting. Then he paints them on Japanese traditional paper or “washi.” Washi is a cloth-like material made from plants, and a shrub known as “mitsumata” is used as a material here.

Pigments serving as a deciding factor of the work’s appearance

Mr. Hoshino requires a long time for his productions. To deliberately ensure that the paints are not applied uniformly, he crumples the paper used in his works and applies ink on the contours of the motif before putting in the colors. He proceeds to superimpose transparent layers until a good color balance is obtained. As each layer takes several weeks to dry, production therefore proceeds at a leisurely pace. 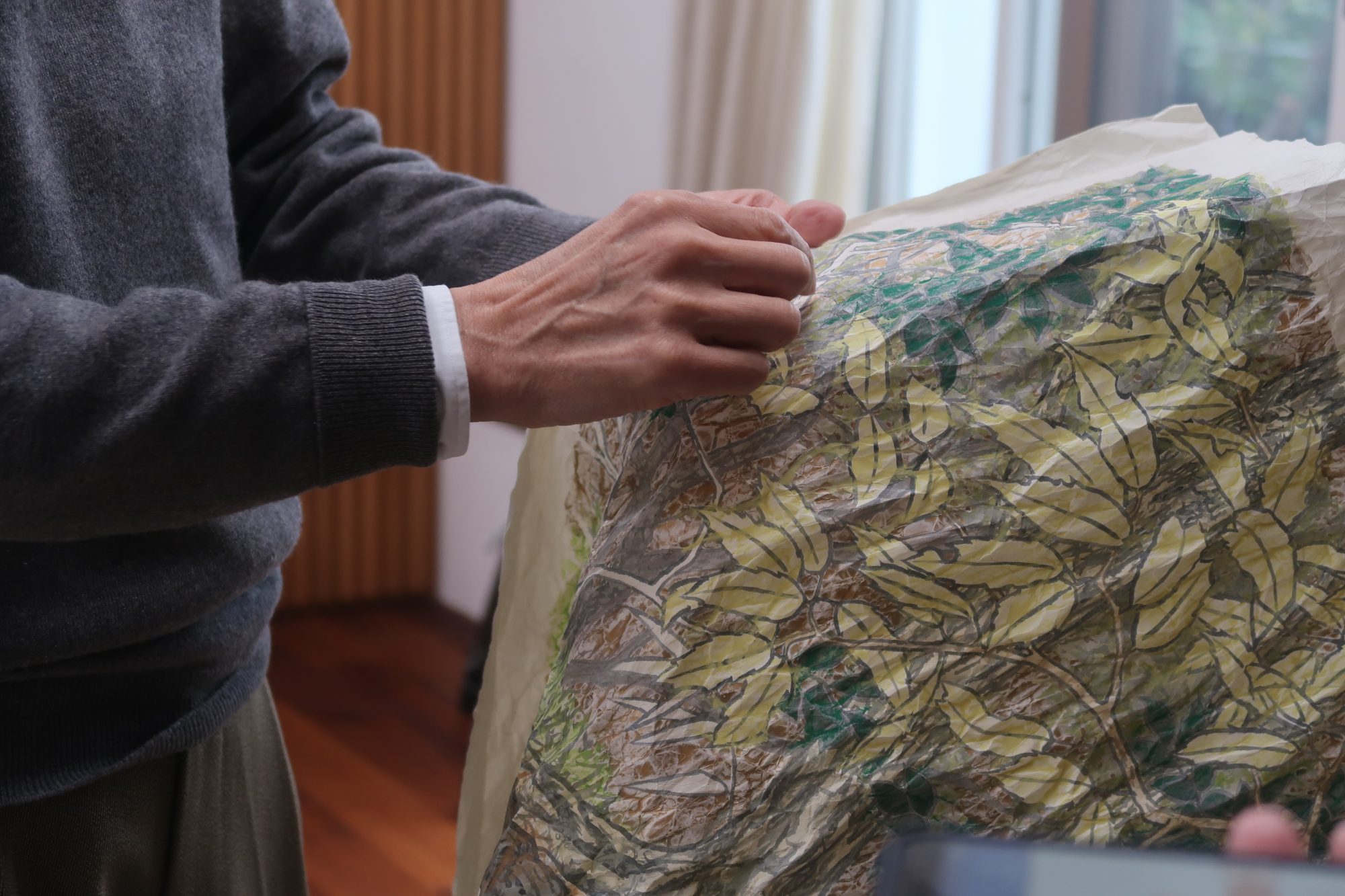 Everyone there listening attentively to the detailed explanation of the production process by Mr. Hoshino

The bond that Mr. Hoshino has with nature is very profound. He follows the teachings of Shintoism. Shintoism worships the power of nature and has its beginnings in Japan. It is believed that a guardian deity resides in each region, and Shintoism is said to pay tribute to the deity in order to maintain the harmony between humans, nature, and the deity. 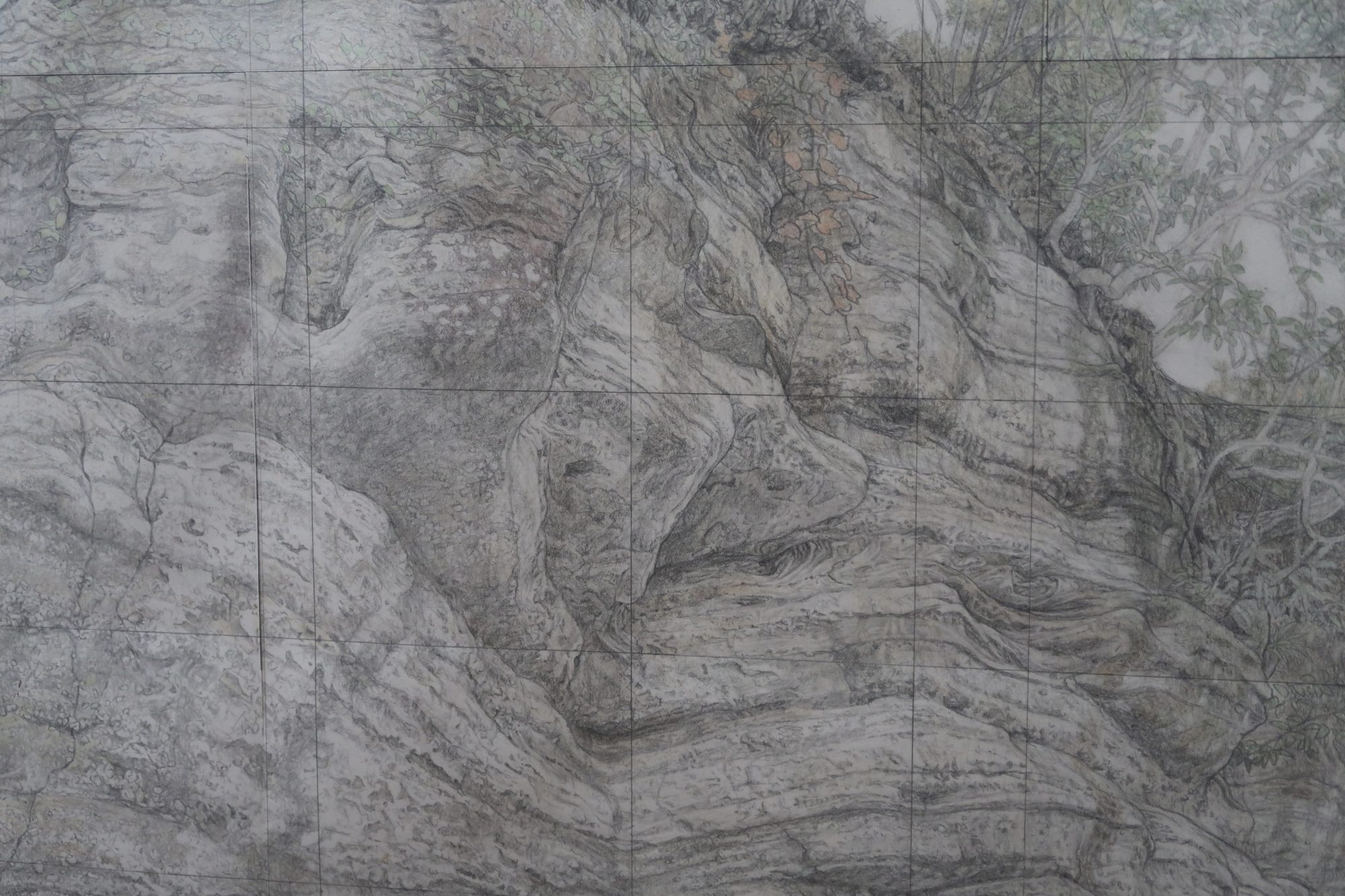 Rough sketch of the work. Colors are inserted over a long period of time from here

One essence of yamato-e lies in the changing beauty of the cycle of nature which continues to be reborn together with the flow of the seasons, and the beauty of the vitality inherent in life which is repeated all over again. One can feel the intricate relationship between art, nature, and gods from his brush work.

As Katsushika Hokusai once said, “You will become a true artist if you do the best in your life for five years.” Similarly, Mr. Hoshino is one that possesses a sense of modesty that aspires to improve perpetually. I pray that someday he will realize his goal of “drawing nature as it is.” He will probably attain his goal and become a perfect messenger to express the spirit of nature before anyone knows.

*A transcript of the interview (in French) is posted on the official blog of Toute La Culture.